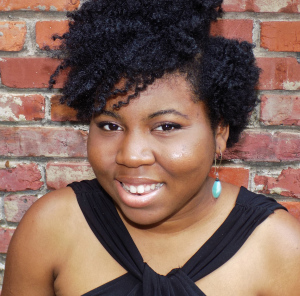 Since graduating from the FIU MFA program in May 2015, poet Ashley M. Jones has received a 2015 Rona Jaffe Foundation Writer's Award, has had her first poetry collection accepted, and has just been named co-editor of PANK Magazine.

The Rona Jaffe Foundation Writer’s Award is given annually to six women writers who demonstrate excellence and promise in the early stages of their careers.The awards of $30,000 were presented to the six recipients on September 17th in New York City.  You can hear Jones and the other awardees  reading from their work on the foundation website.

In early December, PANK Magazine's new publisher John Gosslee announced the latest stage in the life of the magazine, originally founded by M. Bartley Siegel and Roxane Gay in 2006 with the goal of publishing “emerging and innovative poetry and prose, publishing the brightest and most promising writers for the most adventurous readers.” "I want us, as artists, to create wild art with purpose," Jones says in a piece just published in which Jones and fellow editor Chris Campioni discuss PANK's vision and their personal aesthetics.

Jones was a John S. and James L. Knight Foundation Fellow while in FIU's graduate program. She served as Official Poet for the City of Sunrise, FL, and her work was recognized in the 2014 Poets and Writers Maureen Egen Writer's Exchange contest and the 2015 Academy of American Poets competition at FIU. Her poems appear or are forthcoming in Night Owl, The Harvard Journal of African American Public Policy, pluck!, Valley Voices: New York School Edition, Fjords Review: Black American Edition, PMSPoemMemoirStory, Kinfolks Quarterly, Tough Times in American Anthology, and Lucid Moose Press's Like a Girl. Learn  more about Ashley M. Jones at her website.

Writers on the Bay Reading Series